When remembering the Montgomery Bus Boycott of 1955, the common response is to think of the desegregation of buses and of people like Rosa Parks and Dr. Martin Luther King Jr. Scholars have often investigated how organizers were able to successfully execute all the strategies that led to the success of the boycott. Nevertheless, it is rare for one to question what fostered the morale, the courage and the unity that played such a critical role in the development of the boycott. While one can think of the Montgomery Bus Boycott as an isolated, successful event in history, one must recognize the boycott’s gradual evolution that contains the emotions and the struggles that shaped it to have the legacy it has today.

The Montgomery Bus Boycott was a political and social campaign that protested against racial segregation on the public transit system of Montgomery Alabama. Lasting from December 5, 1955 to December 20, 1956, it ended up ruling the segregation of buses unconstitutional. Within her memoir of the boycott, Jo Ann Gibson Robinson speaks to the initial emotions and doubts that the black community had to vocally express their visions for change. Initially, blacks in Montgomery did not dare speak about their desire to desegregate buses. “To admit that black Americans were seeking to integrate would have been too much; there probably would have been much bloodshed and arrests of those who dared to disclose such an idea!1”

Martin Luther King captures this initial hesitation, shedding light into why blacks were not bolder in demanding for justice. “The apathy from which Negroes suffered for so long was derived from their powerlessness and their acceptance of the myth that abundance was not available.2 For decades, African Americans had been abused and made victims of racism. This created a narrative where demanding equality appeared to be unrealistic and unimaginable.

Responses calling for change were limited because of this exact oppressive narrative. The creation of The Women’s Political Council was formed to inspire Negroes to fight against discrimination.3 This organization played a crucial role in the development of the Montgomery Bus Boycott. Within the work it did, it revealed to Robinson that everyone knew black Americans in Montgomery sought an immediate end to segregated busing; however, they were not mentally prepared to demand for this drastic change. Fear and doubt masked this reality from being vocally expressed from the start.4 The black community would have to continue and “forget pride and feeling, forget the terribly offensive names they were so often called when they dared to sit in one of the ten reserved seats.”5

As Robinson has shared within her memoir, one cannot neglect that there was an initial mindset within the black community that prevented them from initially demanding for desegregation. With this in mind, it is necessary to ask what components allowed for the black community to overcome the narrative that invalided their humanity? What enabled them to eventually unite as a collective that led to the success of the Montgomery Bus Boycott?

Scholars too have recognized the “weakness” to which the initial efforts of the boycott had. The reality was, organizers and the community sought to make the busing segregation more acceptable rather than to get rid of it completely. Robert J. Jerome shares, “there is considerable irony in that the first major mass protest of the Civil Rights Movement initially sought as its objective only minor changes that would have allowed Jim Crow transit to continue.6

Nonetheless, these “minor changes” were a part of the process that enabled the black community to gradually demand for desegregation of buses. Their initial demands were progress. They initially sought more “courteous treatment for all passengers,” seating on a first come first served basis (with segregation still in existence), and negro drivers to be hired on routes operating in primarily in black communities.7 It is worth recognizing why it was not logical for the organizers and the community to bluntly demand for desegregation. Some can look down upon the lack of aggressiveness that boycott leaders had in the first demands. In fact, “the negotiating terms proposed by black organizers of the boycott were so weak, that the national NAACP initially refused to endorse the protest.”8 9 This initial lack of support speaks to the gradual process that the Montgomery Bus Boycott went through in developing the ability to demand for greater rights, and desegregation within buses. The initial demands speak to what the organizers and the community deemed appropriate, and that reveals a lot about their mindset and gradual approach to the boycott.

As is known today, whereas at first “there were those afraid to admit” that all blacks in Montgomery sought desegregation from the very beginning, eventually “people had gotten tired; had gained more courage; had sworn to break down all segregation in the area of travel.”10 But this new courage did not come about from nowhere. The truth is that the ability of African Americans to gain more courage and deconstruct the narratives that had prevented them from being vocal were due in part by the increase of industrialization, urbanization, education, and the decision of Brown vs the Board of Education.11 12

The changing demographics and prior events that contributed to what is referred to as the black freedom struggle all allowed for the gradual escalation that led to the success of the Montgomery Bus Boycott. The postwar effects of urbanization and industrialization allowed for some African Americans to rise into the middle class.13 This gave them a sense of security to be more vocal and pressure for change. Similarly, as a more blacks became educated, “higher education levels translated into intensified frustration and grievance against the Jim Crow practices.”14 As blacks had more “tools” to deconstruct the narratives that had made equality unthinkable, one can attribute these to what partially allowed for the progress of the Montgomery Bus Boycott to come about.

One last impactful event from the Civil Rights Movements that enabled for black communities to be more aggressive was the case of Brown versus the Board of Education.15 This court case brought optimism for many. Reverend Edgar N. French who was an important figure during the Montgomery Bus Boycott stated “the Supreme Court decision of 1954 restored hope to a people who had come to feel themselves helpless victims of outrageous inhuman treatment.”16 The impact of this court case boosted the morale and enabled for blacks to validate their own desires for justice and equality. 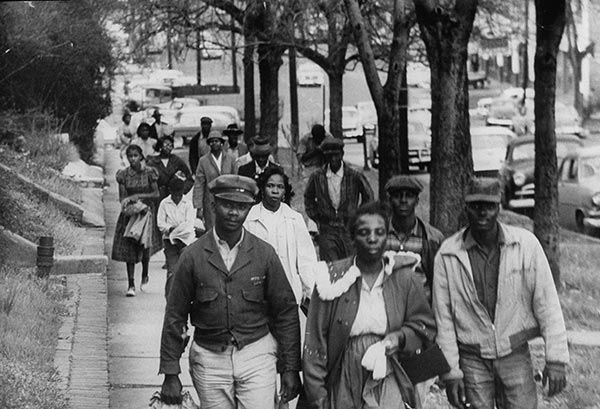 While it is easy to think about the Montgomery Bus Boycott as a single event in American history that contributed to the Civil Rights Movement, this is a very limited viewpoint. As discussed, there are layers to the development of the boycott, both throughout the actual boycott and through the mental and collective morale that enabled its success. It is important to also recognize that this event is not isolated from others that fought for racial justice. The boycott is actually a part of the greater black freedom struggle that gradually built an agenda to advance for an end to discrimination against blacks in the United States. In acknowledging the multi-dimensionality that the Montgomery Bus Boycott had, one not only validates the struggles that communities had to tolerate many decades ago, but it also allows one to recognize the impact and influence this gradual process had on other social movements. Social movements do not just occur from one day to another. They evolve and change drastically, gaining support and criticism from many. If one thing is clear, it is that regardless of their approach, most are all striving for an improvement of American society. One that ends discrimination, has a fair government, and strives for justice within the United States of America.

8 “The Foot Soldiers of the Montgomery Bus Boycott.” The Journal of Blacks in Higher Education, 132.

15 Breathett, George. “Black Educators and the United States Supreme Court Decision of May 17, 1954 (Brown Versus the Board of Education).” The Journal of Negro History 68, no. 2 (1983): 204. Brown v Board of Education was a Supreme Court case that declared state law that had separate schooling for black and white students to be unconstitutional.