Was the Young Lords’ activism an accurate representation of their position as radicals?

In 1968, over half a century following Puerto Rico receiving United States citizenship, Boricuas in the United States continued to face hard times. Economic conditions were weak: jobs were hard to come by (especially for non-English speakers), and jobs that were available involved physical labor and little pay. On a socio-political level, Puerto Ricans in the U.S. faced extreme forms of racism and xenophobia, and all across the U.S. there was a rise in radical responses to that racism and classism. From the Black Panthers to the Brown Berets – people of color all over were mobilizing and using political strategies to reject Anglo-American oppression.1

It was within this period of political radicalism that the Young Lords street gang in Chicago became politicized and radicalized under leadership of Jose “Cha-Cha” Jimenez, who later split from the national organization in Chicago in May of 1970. The Young Lords were comprised mainly of twenty-year-olds who identified as second-generation Puerto Ricans and lived in impoverished communities. Overall, the Lords were committed to articulating a new radical Puerto Rican identity aimed at the betterment of Puerto Rican people. 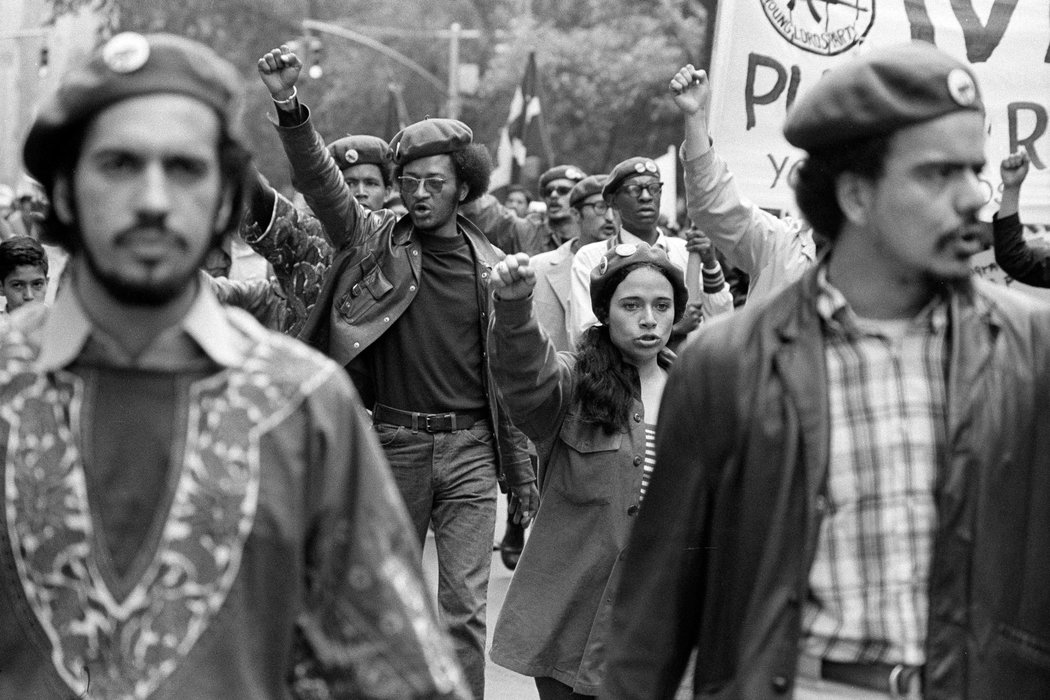 The blueprint of that articulated goal was published as a “13 Point Program and Platform of the Young Lords” in October of 1969. The platform addressed a broader solution to working towards the betterment of Puerto Ricans, and that solution was rooted in their identity as a “revolutionary political party fighting for liberation of all oppressed people” which they later refer to as “third world people”.2

More specifically was the third point of the platform, which claimed the Lords wanted “liberation of all third world people”.3 Then, the point goes into describing that “third world” people were defined as any oppressed community of color because “all the colored and oppressed peoples of the world are one nation under oppression”.4

So, why did it matter that the Young Lords demanded for the liberation of all marginalized people in order to achieve betterment for Boricuas? Well, in point three they emphasize “no Puerto Rican is free until all people are free”.5 How did the Young Lords turn those ambitions into actions? And more importantly, were those actions as radical as the Young Lords themselves claimed to be?

It is undeniable how the Lords turned their ambitions into actions: activism. But, what did that activism encompass? The Young Lords’ activism encompassed a lot of collective efforts that truly affected and assisted communities all over the country in a profound way. Most notably was their activism in New York occurring after their re-inception in 1970. Their activism was grassroots in nature, radical in theory, and very hands-on in practice. Furthermore, the Lords’ activism was centralized around fixing concrete issues right outside their doors, such as garbage buildup and lack of healthcare.6

It all started with the Garbage Offensive in 1970 as a response to the overflow of sanitary neglect in the streets of El Barrio, otherwise known as East Harlem. The trash in the Puerto Rican slums of New York was sorely disregarded, so the Lords took matters into their own hands (literally) and stole brooms, swept the garbage into a pile, placed the pile at the edge of the neighborhood to block traffic, and set it on fire.7 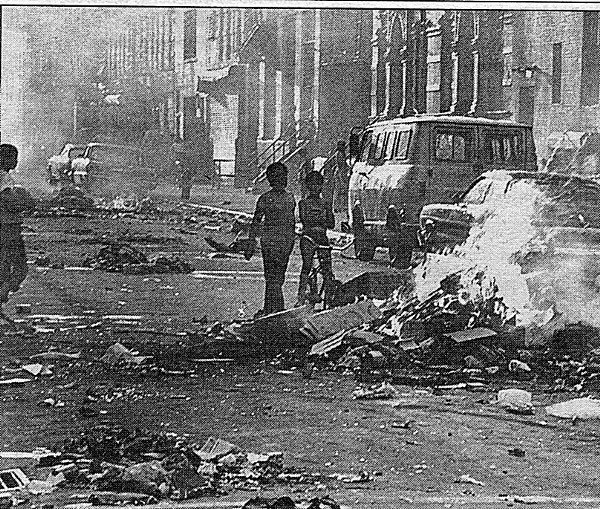 Although their actions were simply cleaning the streets, the symbolism and intentionality behind the way they cleaned the streets, surpassed the sanitation department, stole the brooms, and ensured that everyone noticed the garbage was revolutionary in nature because the Lords were making a statement while making a difference.

The Lords’ activism did not end there. Many churches in Puerto Rican neighborhoods of New York were fully functional buildings; however, the churches were only used once a week to serve the public. So, the Lords occupied several churches and transformed them into housing for free breakfast programs. Although the occupations only lasted eleven days, they garnered national attention and brought the Puerto Rican power movement to the forefront because of the radical choice to occupy the otherwise private spaces.8

The Lords also organized a free daycare for working parents who could not afford day care on their meager salaries. The act was simple on the surface but radical at its core. Making it possible for Puerto Ricans and other minorities to work by caring for their kids was revolutionary because the Lords were indirectly aiding the development of a workforce of “third worlders”, a disruption to the dominative narrative.9

In that same year, the Young Lords also began a program to offer door-to-door lead poisoning and tuberculosis testing. The Lords also hijacked a mobile chest X-ray unit that previously did not visit high-risk, minority-dominated neighborhoods; the Lords eventually operated the vehicle for 12 hours a day, seven days a week in those very neighborhoods. This action may have been the most revolutionary because the Lords were bringing minorities life-saving health care in a fashion that echoed their infamously radical actions such as stealing brooms, occupying churches, and burning garbage.10 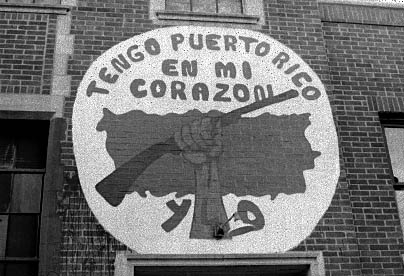 Overall, the Young Lords’ activism was indeed a reflection of their revolutionary stance as a party “fighting for the liberation of all oppressed people”, but the reason for that actually goes beyond their activism. For it was the intentionality behind their activism of providing healthcare, daycare, and breakfast that truly represented their radical ways because behind all of the Lords’ activism was the act of tirelessly reminding Puerto Ricans that they mattered, which at the time was the most radical notion of them all. 1 Enck-Wanzer, Toward Understanding the Young Lords: The Young Lords, A Reader. November 3, 2010. Print. 1-109. The troubling situation described was not unique to The Young Lords, the Brown Berets (Chicano/a), the Black Panthers, or really any marginalized identity at the time. Nationwide, social conditions were sparking various political responses from a wide range of marginalized groups. For example, in the U.S. South, the Student Nonviolent Coordinating Committee (SNCC) was changing its strategy to one based on principles of Black Power, a radical, sometimes militant Afrocentric response to racism and classism. Also, in the Southwest, Chicano/a people were articulating a sense of Brown Pride that eventually included a separatist political strategy of rejecting Anglo-American politics and policing.

2 The Young Lords, “13 Point Program and Platform of the Young Lords Organization”, from the newspaper Palante, 8 May 1970, volume 2, number 2.

3 Ibid. It is also important to note that the Young Lords articulated a set of core principles that were used to guide policy and grassroots activities and identified a core set of slogans for public recitation. The Program and Platform was also revised substantially in 1970 to reflect and direct changes in the organization’s cultural and political commitments.

5 Ibid. This phrase, “no Puerto Rican is free until all people are free” is one of the many ending phrases that followed every point in the 13 Point platform. For example, in the point mentioned above, point 2, which demands for the “self-determination for all Latinos”, the ending phrase is “que viva la raza”, which translates to “long live the race” and has a direct connection to the main parameters of the point.

7 Ibid, 21-26. The trash in the Puerto Rican and other ignored minority neighborhoods had been sorely neglected, as compared to the clean streets in the white neighborhoods of New York. The residents of El Barrio did band together and ask the local Department of Sanitation for brooms, and were denied, so they took the brooms themselves to sweep the garbage into a giant pile that was placed in the middle of a major street at the edge of the neighborhood to block traffic. The garbage offensive was the first protest against the daily injustice suffered by the Puerto Rican people and other third world peoples of New York.

8 Ibid, 48-49. The first church the party occupied was known as The First Spanish Methodist Church (renamed La Iglesia de la Gente – the church of the people).

9 Wanzer-Serrano, David, The Young Lords and the Struggle for Liberation, text, 12 June 2015, 36-38. This program was a great success and benefited those members of the community who has to work full-time jobs in order to support their families.

10 Ibid. Many of the community members (mainly Puerto Rican and African Americans) had not received the most basic tests (including the tests for lead poisoning and tuberculosis). Aside from organizing the door-to-door lead poisoning testing, when the Young Lords learned that the city owned a TB-testing x-ray truck that had never reached the Puerto Rican and black neighborhoods, the Young Lords commandeered the truck and brought it in for use by their neighborhood.