On December 8, 1969, the Los Angeles Police Department (LAPD) raided the Black Panther headquarters. The dozen or so Black Panthers, members of a Black liberation political party, had a few rifles and Molotov cocktails.1 The police brought hundreds of officers, a SWAT team, 5000 rounds of ammunition, gas masks, a helicopter, a tank, and a military-grade grenade.2 After a nearly 5-hour battle, the Panthers finally surrendered. According to the Los Angeles Times, the police were doing what they had to do to defend themselves against violent, dangerous militants. According to the Panthers themselves, the police raid was just one more brutal attack in a years-long war waged against the Black Panther Party by the police.3 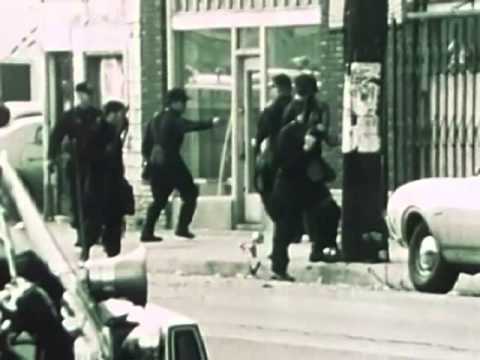 Why would the Los Angeles Times and the Panthers have such different interpretations of the same event? Our beliefs, interests, and perspectives strongly influence how we describe our lives,4 and the interests of the mainstream media usually line up with those of the people in power.5 The Los Angeles Times article told the story of the 1969 police raid from the perspectives of the police, California politicians, and even the Federal Bureau of Investigation (FBI), and in doing so it reinforced the harmful stereotype that the Black Panthers were dangerous, militant, and needed to be stamped out at any cost.

The L.A. chapter of the Black Panther Party (BPP) was founded in 1968. The BPP aimed to create a fairer society for Black people living in the U.S. A key part of their platform was “an immediate end to the police brutality and murder of Black people” through Black-led self-defense groups, meaning Panthers patrolled the streets of their communities carrying guns and looking out for police violence.6 However, much of their work was completely unrelated to self-defense or violence. They provided their communities with free breakfast, clothing, and sickle-cell anemia testing programs.7

Despite the Party’s community service work, to this day many people think the Panthers were violent extremists, partly because of how much attention the media gave to violent encounters between Panthers and police.8 In December 1969, the LAPD’s justification for raiding Panther headquarters was to search for weapons, highlighting how the police assumed violence on the part of the Panthers.9 In reality, the Panthers were less focused on committing violence and more focused on protecting themselves from police attacks such as the 1969 raid. As one Panther said in an interview with CBS: “It is not our purpose to assemble large caches of weapons. If we have weapons, we would distribute the weapons in the community for self-defense.”10

However, the article on the LAPD raid gives a very different interpretation both of what the Panthers believed and what they actually did. It describes the Panthers as a “militant black nationalist group,” establishing them as dangerous from the get-go. The article does acknowledge some violence on the part of the police, noting the presence of “a tanklike National Guard personnel carrier” and reporting that the police “attempted to blast through the roof with dynamite.” However, it also says the Panthers used an “arsenal of automatic weapons, shotguns, and grenades” to defend themselves, suggesting that the Panthers used military-grade weapons when in fact it was the police  who brought in an army grenade to attack the Panthers. Overall, the article makes the Panthers seem like criminals by calling them “suspects” in the headline while never questioning whether the police might have been in the wrong.11

The War on the Panthers: from the LAPD to the FBI

To understand what really happened on December 8, 1969, we must understand that the LAPD raid was part of a long history of police brutality. Police-community relations in L.A. were never great, but in 1950 they got a whole lot worse when William Parker became police chief. Chief Parker was against the Civil Rights movement and strongly anti-Mexican. In order to control what he saw as rebellious, dangerous groups, he set up a “paramilitary police model” at LAPD that made the department “one of the most repressive police forces in the country.”12 Part of Parker’s new model was the Special Weapons and Tactics (SWAT) team, the same one that attacked the Panthers in 1969. Although Parker left the LAPD in 1966, police harassment towards people-of-color-led groups like the Panthers continued throughout the 1960s and 1970s.13

The December 8 raid was not only part of a pattern in L.A. but also part of a larger, national story of police and government harassment of the Panthers. Throughout the 1950s and 1960s, the FBI used a range of surveillance and repression tactics to interfere with social movements. One of their secret surveillance programs was called COINTELPRO, and it involved FBI agents working with local police departments like the LAPD to infiltrate, spy on, and shut down groups like the Black Panthers.14

The FBI saw the Black Panther Party as one of the greatest threats to national security, regardless of whether they were carrying guns or serving free breakfast to hungry children. Just four days before the L.A. raid, two Panthers were murdered in an almost identical raid of the BPP headquarters in Chicago ordered by the FBI and carried out by the Chicago police force.15 According to a Dec. 29, 1969 ACLU report, these raids were “serious civil liberties violations.”16

Media bias (and fighting back)

Historian Curtis J. Austin writes that “the media refused to analyze the Panthers…within the context of American history.”17 Sure enough, the Los Angeles Times article barely mentions the long history of violence against the Black Panthers by the police and the FBI. Instead, it ends with a quote from California Governor Ronald Reagan stating that “it is clear that the Panthers have made their policy one of violence and outright revolution,” leaving readers with the impression that the Panthers were dangerous, and that police violence against them was justified.18

Occasionally, these biased news reports actually worked in the Panthers’ favor by making their cause more visible and helping them recruit members and allies.19 However, more frequently the mainstream media undermined the Panthers’ cause and legitimized police violence against them.20 In other words, the media played right into the hands of those that wanted to destroy the Panthers.

Still, the Panthers fought back with their own newspaper, The Black Panther Community News Service, which they claimed was “free from the distortion, bias and lies of the oppressor-controlled mass media.”21 In this newspaper, the Panthers told their side of the story—the story that newspapers like the Los Angeles Times wouldn’t tell. Although the Panthers don’t print a newspaper anymore, platforms like Facebook can also help combat mainstream media bias. One of the founders of the BPP, Bobby Seale, recently posted a status about the 1969 LAPD raid in which he emphasizes that the Panthers were “not guilty.”22 Despite the bad press they got from mainstream media, the Panthers continue to fight to tell their own stories.

17Curtis J. Austin, Up Against the Wall: Violence in the Making and Unmaking of the Black Panther Party, (Fayetteville: University of Arkansas Press, 2006), 336.

Austin, Curtis J. Up Against the Wall: Violence in the Making and Unmaking of the Black Panther Party. Fayetteville: University of Arkansas Press, 2006.