OVERVIEW:
The overall goal for students is to gain historical knowledge on the environmental justice movement. While using the Principles of Environmental Justice, selected readings, and visuals students can get a better understanding of the movement.

Furthermore, students will be reading a passage from Robert Gottlieb’s book, Forcing the Spring: The Transformation of the American Environmental Movement. Students will receive an academic point of view of the movement and its origins while having class discussion on the book. In addition, students will have access to maps and graphs that depict the movement while improving their geographical and analytical skills. These activities make students have the chance to speak and better interpret the environmental justice movement. The skills that students will gain from these activities are important overall as they provide an opportunity for students to improve on their speaking and analytical skills.

ESSENTIAL UNDERSTANDING:
The Environmental Justice Movement is based on the influence of other social movements while creating a unique movement that included race, class, and gender as part of the movement’s core beliefs. 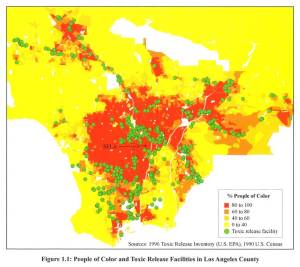 ACTIVITIES:
Day 1:
For the following activities students will change their seats and arrange them in a circle. It is understandable if there is no space in the classroom and it’s hard to move around, therefore this seating arrangement in a circle will not be enforced. Ideally throughout this lesson plan students will have the opportunity to change their space dynamics and better communicate with one another by forming a circle. Again if there is no space to arrange this seating, the lesson plan will not be affected.

Afterwards, teachers will do the second activity of the day. Before class, teachers must print and cut the 17 principles. Here is the link to the Principles of Environmental Justice: http://www.ejnet.org/ej/principles.html. Depending on the number of students, students will receive randomly one principle or if the class is larger than seventeen students, 3 to 4 people will then share one principle. After students receive one environmental justice principle, their assignment is to draw what they deem as a representation of their principle. Students will have only 15 minutes for this portion of the assignment. Next, students will then have the chance to present to the class what their drawing represents and how it interprets their principle. When students have finished presenting, the teacher will pass the Preamble to each student. As a class students, with some help from the instructor, will interpret and break down the significance of the preamble and how it relates to the environmental justice movement. Here are some helpful questions throughout this process:
1. Do you see any connections with the Civil Rights Movement?
2. What separates the environmental justice movement from other social movements?
3. What was the intention of the preamble?
4. How do the 17 points reflect the preamble purpose?

For Homework please assigned the excerpt from Robert Gottlieb’s book, Forcing the Spring: The Transformation of the American Environmental Movement. Here is the link: http://pages.pomona.edu/~tfs04747/25CH/Resources/2013/MS1.pdf

Day 2:
The instructor today will have the option to print or project the following map and graphs for students. Below is a visual of the map and link to the graphs:

First the instructor will present the map and after 4 to 5 minutes will ask the following questions:
1) What patterns do you see from this map?
2) Do you see a connection between polluting sites and where communities of color are located? If so, where?
3) How does this relate to the environmental justice movement?

After discussion, the instructor will show the graphs. Again allow students to read and analyze the graphs. You may ask the follow questions to guide discussion:
1) From the various graphs what connections can you associate class, race, and the exposure to hazardous and polluting sites?
2) What is the significance of each graph? Summarize in one sentence as the document indicated below each graph.
3) Can you make connections from the map we saw earlier to the graphs we see? What are the similarities?
4) How does the graph represent the cause of the environmental justice movement?

What did you learn about the environmental justice movement? Have these concepts make you view your community or other communities you might know differently? If so, how?

STANDARDS:
Key Ideas and Details:
2. Determine the central ideas or information of a primary or secondary source; provide an accurate summary that makes clear the relationships among the key details and ideas

Craft and Structure:
4. Determine the meaning of words and phrases as they are used in a text, including analyzing how an author uses and refines the meaning of a key term over the course of a text
5. Analyze in detail how a complex primary source is structured, including how key sentences, paragraphs, and larger portions of the text contribute to the whole.

Integration of Knowledge and Ideas
7. Integrate and evaluate multiple sources of information presented in diverse formats and media (e.g., visually, quantitatively, as well as in words) in order to address a question or solve a problem.
9. Integrate information from diverse sources, both primary and secondary, into a coherent understanding of an idea or event, noting discrepancies among sources.

11.10 Students analyze the development of federal civil rights and voting rights
5. Discuss the diffusion of the civil rights movement of African Americans from the churches of the rural South and the urban North, including the resistance to racial desegregation in Little Rock and Birmingham, and how the advances influenced the agendas, strategies, and effectiveness of the quests of American Indians, Asian Americans, and Hispanic Americans for civil rights and equal opportunities.